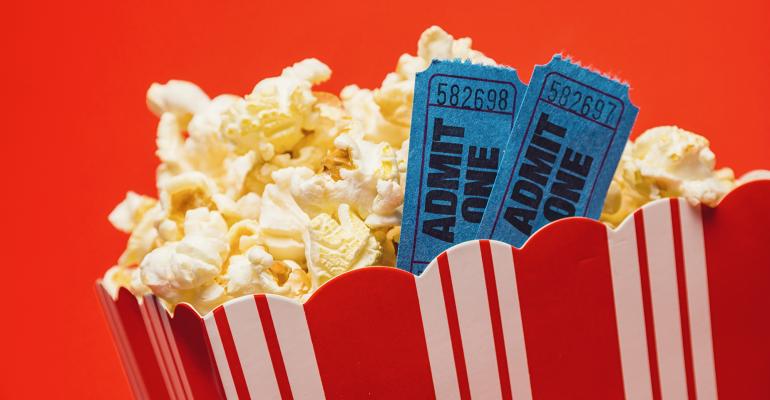 Going to a movie will become a big deal akin to going to a sports game or a concert.
(Bloomberg Opinion) — As cities struggling with a surge in apartment and commercial vacancies think about their post-pandemic futures, one disruption that’s likely to benefit them is the shift happening now in the movie industry.
There have been signs for awhile that Hollywood was experimenting more with direct-to-streaming for big budget movies, but Warner Bros.’ announcement that it would release all of its films on HBO Max in 2021 at the same time they go to theaters shows that the new era is here. This may represent the end of the movie theater industry as we’re used to it, but represents an opportunity for cities.
To imagine what a hybrid distribution model for movies might be like, we can look at other industries that have been disrupted by the internet. Book stores still exist, but there are far fewer of them than before, and the ones that survived get by on a mix of scale — a handful of Barnes & Nobles in big cities — and niche offerings, like special events or independent book stores that cater to bibliophiles. For everyone else interested in purchasing books there’s e-commerce, where both physical books and e-books are available for sale.
The music industry has figured out its own hybrid model to replace the dominance that compact discs had a generation ago. While CDs and other formats of recorded music still exist, most of the music industry’s revenues are generated through a mix of live events like concerts and festivals plus streaming services like Spotify and Apple Music.
The future of movie distribution will probably have some parallels to what we’ve seen in books and music. Most people are focused on the growth of streaming services like Netflix Inc. and Warner’s HBO Max, and to be sure, a bigger share of movies will probably be distributed on platforms like that. We’ll still have movie theaters — or at least, physical spaces where we can pay to watch movies — but to make the economics work the business model will have to change.
Rather than blockbuster movies being released in 4,500 theaters across the U.S., there may be only a fraction of that to cater to the smaller number of consumers still interested in the big-screen experience when streaming options are readily available. To draw people into theaters, plush seating, large screens and state-of-the-art sound systems will be essential. And that spells doom for theaters unable to keep up with the arms race or located in communities where consumers are unwilling to pay the kinds of ticket prices needed to justify those investments.
Going to a movie will become a big deal akin to going to a sports game or a concert. And most likely, these venues will be in cities or large metro areas with a big enough customer base to support these types of venues.
And then there will probably be room for niche, smaller venues like the Alamo Drafthouse chain that caters to a more affluent crowd, where the food and beverage program becomes a differentiator the way it is at upscale restaurants. These, too, are more likely to be located in affluent communities and large metro areas rather than middle-class suburban ones.
The big idea here, of which movie distribution is just the latest example, is how the internet is at once both great for stay-at-home consumption options — it’s never been easier to watch a sports game, listen to music, purchase goods or watch movies from the comfort of your home — while still leaving space for higher-end experiential consumption at physical venues. And that’s a change that benefits cities, which have  both the wealth and population to make those business models work.
Consumers are the ultimate beneficiaries in this new world. Tens of millions of people will be able to watch new-release movies from the comfort of their own homes. For those still inclined to watch movies on the big screen, the experience will continue to improve — if they’re willing to pay top dollar and travel to destination venues. The losers here are those businesses and consumers invested in the way things used to be; yet more casualties in the disruption caused by the internet.
Source: “Cinemas Join the Internet Makeover of American Cities: Conor Sen“