CRE’s Projected Recovery Has Morphed Into a Swoosh Shape

While CBRE is optimistic about the larger US economy’s recovery, commercial real estate will take a longer time. 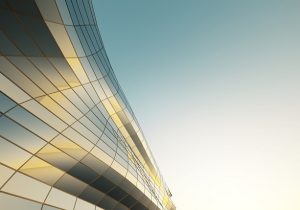 A month ago CBRE released a sobering report about its projections for the US economy and the commercial real estate industry, declaring that the former will start to see growth in 2021 while recovery in the latter would trail the economic rebound spanning 12 to 30 months, depending on the sector.
One month later, Richard Barkham, global chief economist and head of Americas Research, provided more color and filled in more details about these projections in a recent webinar.
For starters, Barkham still believes in a V-shaped recovery for the US economy, but he wonders if the aftershocks of COVID-19 are going to usher in a period of volatility.

But for CRE “we see a Nike swoosh shape recovery for the commercial real estate sectors,” he continued.
For industrial, CBRE sees a one-year recovery for the industrial sector, which has been remarkably resilient and has had a strong positive nudge from the growth of e-commerce, Barkham said.
Multifamily has a one-and-a-half year recovery period or perhaps a bit quicker as rents have dropped. “And as people come out a lot there and they’ll be seeking to form families and secure premises and get on with their lives.”
CBRE projects a likely two-year recovery for offices, “where there will have to be some new office protocols and new ways of managing offices established before leasing can continue.”
The wellness trend will be magnified in the post-coronavirus world for offices, Barkham said. “Clearly COVID-19 has given that a great big positive nudge. And it can affect everything. It can affect the HVAC systems that go into buildings. It can affect the furniture systems. We may need a shift to furniture systems that allow easier, deep cleaning. It moves towards the nature and operation of the janitorial services within a building. So, it could push up the cost of running offices, until we learn about it and make efficiencies in it.”
Retail is facing a three-year recovery trajectory as many of the food and beverage businesses and perhaps some retailers won’t be coming back. Instead, new businesses will have to come along to fill up that space, Barkham said.
Interestingly, the pullback in international travel might prove to be favorable to retail, he continued. “I think quite a lot of that money that has not been going on into international travel…might get redeployed into the retail sector. We might see a stronger balance in retail. And I think it might curiously enough come back in auto sales. If people are not allowed the treats that they would normally have from international travel, they’re going to be thinking about ‘what new car I can buy.’”

Still Talk of a V-Shape

It should be noted that many economists have backed away from earlier projections that the larger US economic recovery will follow a V-shape, propelled by pent-up demand and the extraordinary level of government stimulus.
Barkham, though, makes his case.
He pointed to earlier events that hold some clues about the potential speed for recovery, starting with China’s experience. “China had two months of lockdown, got on top of the virus very capably despite a late start,” Barkham said. “And the economy one quarter on is bouncing back quite nicely. So, China is our current comp.”
Barkham also factors into his analysis other big supply shocks to the economy, such as the oil shock in 1973, “which I don’t think most people will remember, but it brought Western economies to an absolute dead halt.” A combination of government stimulus and monetary stimulus got the economy going quite quickly.” But even though growth resumed quickly after the oil shock, it can’t be denied that the seventies were a period of volatility, he said.
Other lessons can be learned from 9-11, he also said. “We did hear after 91-1 that people are never going to go back into tall buildings and we’re hearing it now. People are never going to go back into offices. I think it’s way too early to come to that conclusion although you’ll have to say in the medium term, by which I mean that 18 to 24 months, the trend towards increased density that we were seeing, that is obviously going to come to a halt.”
But perhaps the most significant comparison that can be made is the 1918 Spanish flu that killed about 65 million people globally and 650,000 or so in the US. “Shortly after that we had the roaring twenties,” Barkham said. “You had a period of consumer growth, you had a period of consumer exuberance. I think these kinds of harsh lockdowns can sometimes produce an opposite reaction, which is to more flamboyant small consumption, more extravagance as people, as the fear factor, and the lockdown factor disappears from the popular consciousness.”
Resource: “CRE’s Projected Recovery Has Morphed Into a Swoosh Shape”