Alan Cozzens could sympathize when he read recently that Taos residents were complaining about paying $70 a month for Internet service that provides sluggish download speeds of 10 Megabits per second. But if you want to know what slow is, he said, drive an hour south to his home in the Pojoaque Valley, where the fastest service he can get is 3 Mbps — at a cost of $96 a month. 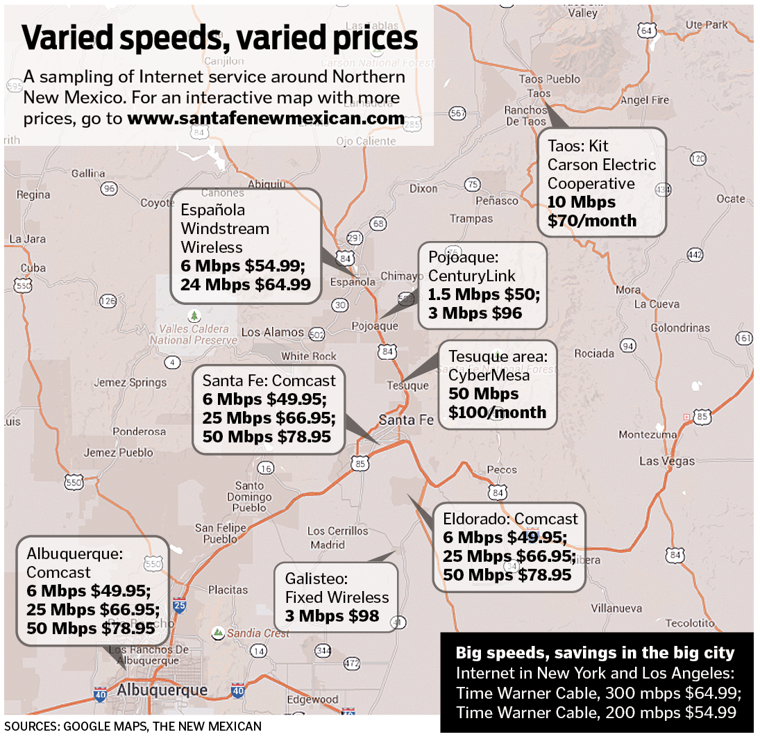 Finding funds to boost broadband
Different groups around the state have worked for a couple of years to identify the problems, costs and financing to boost broadband around New Mexico.
Les Montoya, manager of rural San Miguel County and president of the North East Regional Economic Development Organization, said his group is waiting for a baseline study from the state Department of Information Technology analyzing available broadband in the region and identifying possible funding sources for infrastructure.
The state received $4.7 million in federal funds to establish a broadband program that’s focused for the last couple of years on mapping broadband availability, promoting digital literacy and finding out why people don’t subscribe to the Internet in their homes. New Mexicans surveyed said the three biggest reasons they don’t have Internet at home was because they don’t have broadband access, can’t pay for the service or don’t have a computer.
Gar Clarke, who heads up the broadband division of the New Mexico Geospatial Program, a state division that maps Internet availability across the state, said part of the problem is the state doesn’t have a fund dedicated to investing in Internet infrastructure.
A bill that would have provided such a fund died in committee during the last legislative session. Without that money, the state can’t provide matching funds for federal grants, often a requirement to procure that money, and can’t invest in local community projects, Clarke said.
In Eldorado, a small community 15 miles southeast of Santa Fe, residents got fed up with poor Internet service. So about a decade ago, they banded together and started their own. The service, known as the La Cañada Wireless Association, provides wireless access to about 400 residents in and around the subdivision, said association president Joel Yelich. The group ties into lines from a CenturyLink hub in Santa Fe and then broadcasts WiFi signals to its customers from fixed points.
“On a small scale, it’s really not that difficult,” Yulich said.
Sharon Strover, an Internet expert and professor at the University of Texas at Austin, said that kind of system is becoming more common across the country as the cost to purchase and use the technology declines.
By no means is a fixed wireless system the perfect solution for rural communities. Yelich said transmissions can be affected by numerous factors such as terrain and inclement weather. Additionally, speeds for the La Cañada community vary from 1.5 to 3 Mpbs depending on the resident’s proximity to wireless transmitters.
But whereas Cozzens currently pays $50 for 1.5 Mpbs (and would pay $96 for 3 Mpbs) through CenturyLink, a major Internet provider in the Southwest, members of the La Cañada community only pay $30 a month for their service.
CenturyLink said it’s able to provide coverage for most of the Pojoaque Valley and other nearby portions of Northern New Mexico with Internet speeds ranging from 1.5 to 40 Mpbs.
Sara Spaulding, a spokeswoman for the company, said it doesn’t charge more in rural areas despite what some people might say. She said prices, however, do vary based on promotional contracts and bundled discounts, which could explain the differences in price.
“It’s not an apples-to-apples comparison,” Spaulding said.
Spaulding said the national company is developing infrastructure to “upgrade services as it makes good business sense.” The spokeswoman also said the company has had issues developing Internet services in Northern New Mexico because of right-of-way issues with tribal lands.
Those explanations don’t sit well with Cozzens, who recently saw his rates go up by a dollar.
“It must be really great to be an unregulated monopoly and get to stick it to your customers any time you feel like for as much as you want,” he said.
By: Chris Quintana and Staci Matlock (Santa Fe New Mexican)
Click here to view source article.
Back to News
6739 Academy Road NE, Ste 310
Albuquerque, NM 87109admin@carnm.realtor(505) 503-7807