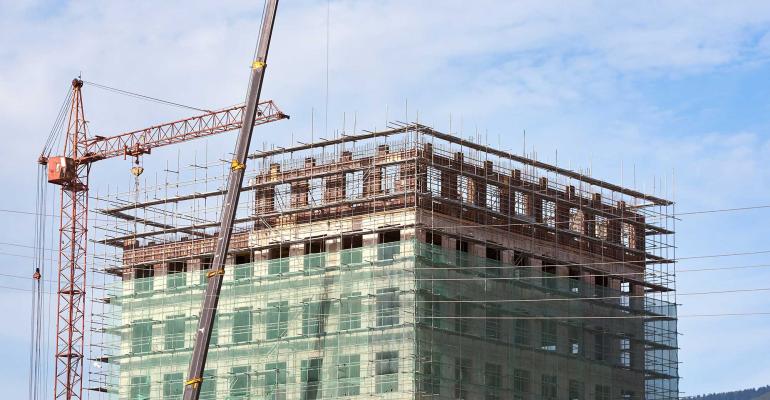 Builders have had no choice but to deliver projects that were in progress when the market turned and try and compete for bookings.
Despite the well-documented plummet in demand for hotel rooms that has only partially recovered from the lows at the height of worldwide COVID-19 precipitated lockdowns, developers are continuing to bring new projects online.
It’s a difficult time to operate any hotel—let alone open a new one. Just 48.6 percent of hotel rooms were occupied in August 2020, according to data from STR Inc. That’s down sharply from 71.2 percent the year before. However, as low as the occupancy rate was for hotels in August, it’s much better than the low of just 24.4 percent in April.

The problem is that the pipeline for hotel rooms was chock full of projects before the pandemic hit. Developers had 217,000 new hotel rooms under construction in September 2020, according to STR. That’s up from 215,000 at end of June 2020 and 202,000 this time a year ago.
Developers have had little choice but to try to bring those projects online and compete the best they can for bookings.
“We are getting our fair share of the low demand in the market,” says Patrick Short, president of Atlanta-based Peachtree Hospitality Management, which has opened three new hotels so far in 2020, totaling 279 new rooms.
Despite the difficult economy, very few developers have stopped construction on hotels they started building before the pandemic.

“There are only one or two hotels under construction that are falling out of the pipeline,” says Jan Freitag, senior vice president of lodging insights for STR. “If your hotels are 50 percent to 75 percent complete, those hotels are going to get done.”
Hotel developers are slightly more likely to consider dropping plans to build hotels if they have not yet broken ground—but not by much. Developers deferred or abandoned plans to build just 58 hotel properties out of 4,052 hotel developments that were in the planning stages in August 2020, according to STR. That more than the same month the year before, but it is still very few, considering the economic chaos caused by the coronavirus.
“The general sentiment around construction seems to indicate that although we took a hit from COVID-19 [the disease caused by the coronavirus], projects under development are still moving forward,” says Peachtree’s Short.
That’s partly because once a hotel opens, it typically only takes a few months before it is able to fill as many of its rooms as other, comparable hotels nearby, earning a respectable amount of revenue per available room (RevPAR).
“For branded hotels, we would expect to achieve 100 percent RevPAR index within three to six months, depending on the brand,” says Mary Beth Cutshall, executive vice president and chief business development officer for Hospitality Ventures Management Group (HVMG).
A typical limited service hotel can often operate without losing money with an occupancy rate of just 30 percent, even with the precautions properties are taking to making sure employees and guests are safe. This summer, limited service hotels filled over 50 percent of their rooms on average, according to STR. If a new limited service hotel could achieve that average occupancy rate, it was worth it to open for business.
The most successful new hotels this summer have been limited-service properties near natural features like beaches that are also within driving distance of major metropolitan areas where many potential hotel guests live.
“Leisure markets are faring significantly better than those that are more corporate driven,” says Short. With fewer people flying to destination vacations and international trips ground to a near halt, Americans who can afford to travel are making the best of things by taking trips by car.
“Some of our hotels in drive-to beach destinations are actually performing better now as compared to last year from a RevPAR perspective.”
Full-service hotels, which typically include dining services and meeting space, need to fill more rooms—at least 40 percent—to break even. Also, these hotels often rely on business travellers and corporate groups, which have not been renting many rooms during the crisis. The occupancy rates for full-service hotels have hovered in the 30 percent range this summer, according to STR.
“Full-service hotels may not find it advantageous to open in the fall of 2020, and might instead wait to the first quarter of 2021,” says Freitag.
New hotels can also cut their expenses to make up for fewer guests. “We did scale back on opening staffing and are utilizing managers to cover shifts as we ramp up,” says Short.
For example, at Peachtree’s three new hotels, all the rooms are open and available, though company has hired fewer workers than usual for an opening. “We did scale back on opening staffing and are utilizing managers to cover shifts as we ramp up,” says Short. “Hourly associates have been very difficult to find.”
Peachtree is also spending less on marketing these new hotel rooms. “The marketing we are doing is with travel ads with the over-the-air television channels,” says Short. “Typical, local marketing has been put on hold.”
Peachtree’s goal has been to get its fair share of the demand in the market to its new hotel rooms, in addition to reach decision makers at local corporate account that may eventually rent rooms as the economy recovers from the pandemic, according to Short.
Even full-service hotels can reduce their expenses by cutting some of their services.
“By suspending various amenities such as valet and room service, hotels can scale back and save money,” says Skyler G. Cooper, regional manager and national director, hospitality division for Marcus & Millichap. “As we continue to move towards a recovery, we expect to see hotels expand the number of employees on their payroll and open amenities back up.”
Source: “Hotel Developers Continue to Open New Sites Despite Brutal Market Conditions”