Landlords in U.S. Squeezed Between Missed Rent and Overdue Loans

Many small landlords in U.S. have less financial flexibility in dealing with missed rent payments. 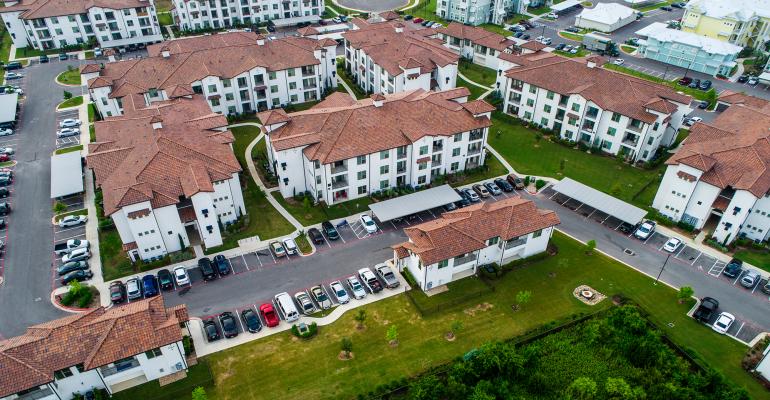 Chuck Sheldon, a landlord and property manager in Albuquerque, New Mexico, has owned apartments for more than half a century. These days, he can barely keep up with all the moving pieces.
He’s talking with owners of roughly 1,700 units he manages, who are worried what’s going to happen if rent checks stop coming in. He’s talking with tenants, about half of whom he assumes will be delinquent this month because they lost jobs or choose not to pay. And he’s in discussions with banks, trying to figure out how he’ll make mortgage payments on the properties he owns during a rapidly worsening global health crisis.

“That’s the $100,000 question,” said Sheldon, the president of T&C Management. “I’ve never seen something like this.”
It’s rent day in America, with roughly $22 billion in monthly payments on apartments due, according to CoStar. But just how much of it gets paid in the coming days is anybody’s guess.
Some large property owners have already rolled out payment plans and halted evictions as the coronavirus outbreak roils the economy. But many apartments in the U.S. are essentially small businesses that tend to have less financial flexibility and will need help in the coming months.

There are few good choices for the millions of Americans who lost their jobs and have no clear prospects for when they’ll get them back. Eviction moratoriums, unemployment benefits and cash payments from the federal government could help many keep a roof over their heads.
But nearly half of the nation’s 44 million renter households were already stretched financially. Over the next six months, they could need as much as $96 billion in relief, according to a recent analysis by the Urban Institute.
Housing advocates have urged Congress to protect low-income renters and homeowners as deadlines loom. On a conference call Tuesday, the Center for Popular Democracy called for eviction freezes and rent and mortgage payment cancellations. The group stopped short of pushing for a rent strike, an idea other activists have floated.

Sid Lakireddy, a landlord and the president of the California Rental Housing Association, said such efforts are “just plain wrong.” Property owners need to help tenants if they’re able, but renters should not take advantage of the situation, he added.

On a recent visit to an apartment building he co-owns in Berkeley, California, Lakireddy bumped into a tenant who threatened to withhold rent because of a new ban on evictions. He pointed out that the tenant hadn’t lost a job.
“I said, ‘You’re not affected by this economy. You’re on Social Security,’” Lakireddy recalled. “‘Don’t screw with me, man.’”
Not far away, in Oakland, Krista Gulbransen manages a duplex for a small property owner. She recently got a request from a tenant to lower the $3,495 monthly rent on his three-bedroom unit by roughly 40%. The renter makes about $172,000 a year at an established technology company, she said.
“I just didn’t understand,” said Gulbransen. “He’s asking for a rent reduction of about $1,500, saying he doesn’t know where his job is going to be in the next few months.”
Such anecdotes are probably rare, said Maya Brennan, a policy analyst at the Urban Institute.
“The vast majority of renters know that they need to figure out a way to keep a roof over their heads and are going to be trying to ask only for the level of relief that they truly need,” she said.
Not all the conversations between landlords and tenants are fraught. Hasan Leviathan, 20, lives by himself in a two-bedroom house in Frostburg, Maryland, where he is studying to become a physical therapist. In March, he lost his job at Kay Jewelers. Without that income, his $570 in rent is too burdensome, even with help from his mother, he said.
Leviathan was prepared to move home, but his landlord agreed to stretch the April payment over the next six months, and also offered him a minimum wage construction job, which he plans to accept.
“People need help more than ever,” Leviathan said.

Chris Athineos, a Brooklyn landlord who owns nine buildings with about 150 apartments, half of which are rent-stabilized, said he’s sure some of his tenants have lost jobs and plans to work with them, perhaps offering the option of making partial payments.
Some rent checks for April have trickled in, he added. And a handful of tenants who have relocated out of the city called about making payments electronically, he said. It won’t be until the middle of the month that he’ll get a full accounting of how much of the expected rent came in.
Athineos said rent freezes don’t make sense, unless landlords get relief from property taxes. For now, he’s still paying a staff of five maintenance workers — on top of his mortgage, taxes and water and sewer bills.
“It’s kind of wait and see,” he said. “We’re holding our breath.”
–With assistance from Patrick Clark.
To contact the reporters on this story: Noah Buhayar in Seattle at nbuhayar@bloomberg.net;
Oshrat Carmiel in New York at ocarmiel1@bloomberg.net; Nic Querolo in New York at jquerolo1@bloomberg.net.
To contact the editors responsible for this story: Craig Giammona at cgiammona@bloomberg.net
Christine Maurus
© 2020 Bloomberg L.P.
Source: “Landlords in U.S. Squeezed Between Missed Rent and Overdue Loans“