A growing taste for higher-quality office space may be another effect of the pandemic on the commercial real estate sector. 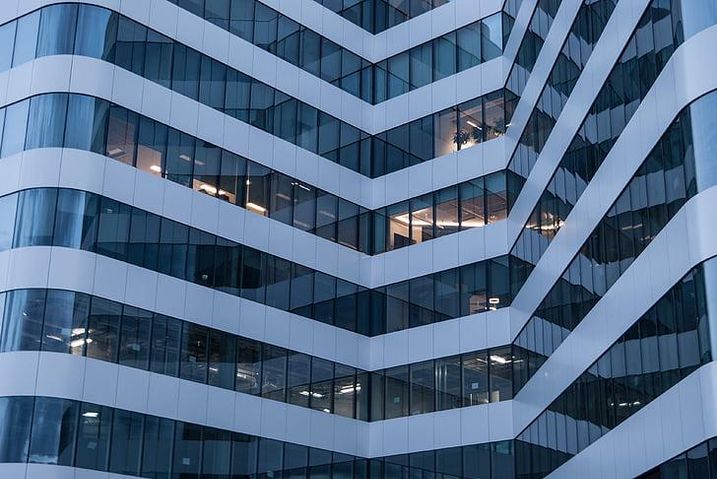 From January until mid-May, four- and five-star office space represented 49% of gross leasing activity, representing a 3% jump compared to previous years. Lower-quality buildings attracted an even smaller share of new deals than in previous years, according to new data from CoStar Group.
Using their building rating system, which evaluates characteristics like structural and systems specifications as well as amenities, the commercial real estate site traces the jump this year to a trend stretching back until at least 2010. It is also one likely accelerated by the coronavirus pandemic, according to CoStar Group Managing Consultant Nancy Muscatello.
“This is not a new trend. We have been seeing over the course of that whole last entire cycle office demand accruing towards higher-quality, better-located buildings, typically those that are newer, that offer more amenities,” Muscatello said.
“Now, we would expect these trends to accelerate, just adding on this extra layer of slower economic growth, even more than was expected prior to the pandemic, and also a focus on the features in a building that will promote health,” she said.
Since 2010, demand for four- and five-star offices has grown at four times the rate of that for three-star properties and 19 times the rate of that for one- and two-star offices, according to CoStar.
Muscatello said the trend could be attributed to demographic preferences and the economic need for offices with increased density.
“As the baby boomers are moving further into retirement age, there have just been further folks in that working-age cohort, so that augurs for less demand,” Muscatello said. “And you have this overall trend in space use, at least over the last cycle, towards more densities, and that augurs well for less space.
An acceleration of a performance divide between newer and older properties can be expected partially as a result of the pandemic, according to JLL Managing Director Chris Roeder.
Newer buildings, which tend to have more natural light, more amenities and more outdoor space, generally better facilitate a focus on health and wellness, Roeder said, adding that health and wellness is likely to be as important this decade as sustainability was last decade. 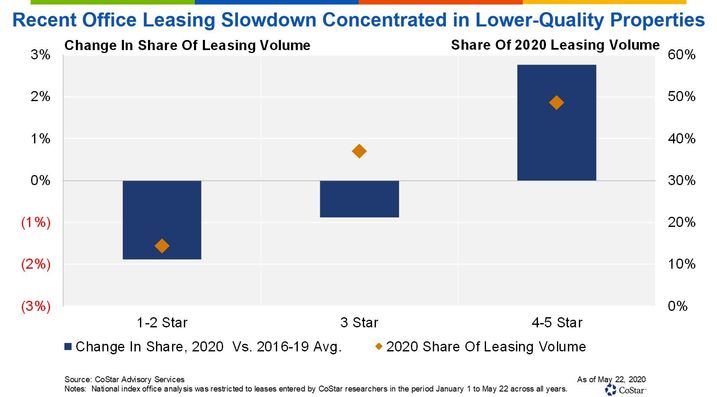 “I think moving forward, you’ll see even more of a premium paid for newer assets for all the same reasons, but I think there will be a higher level of importance than ever before,” he said.
Among the features most suddenly crucial as a result of the pandemic, a modern HVAC system, also happens to be one very difficult to add to older buildings, Muscatello said.
While older systems work by recirculating indoor air, newer, more expensive systems work with fresh air.
Despite a growing preference for newer buildings specifically, the office sector as a whole will continue to be hit by the economic slowdown, according to Muscatello. Overall office leasing started the year strong, entered a descent in March and then plummetted in April and May, according to CoStar’s data.
“New demand in this environment will be very sluggish,” Muscatello said. “A lot of landlords, too, are probably going to be looking towards trying to preserve occupancy in this environment, and so they might provide some discounts on rent in order to either get or retain new tenants.”
But once the economy enters a more stable and certain recovery period, older properties might be prone to being left behind. A flight to quality, which Hughes Marino Senior Vice President Cale Miller said tends to accompany economic downturns, would likely amplify a performance divide between older and newer buildings that emerged gradually last decade.
Moreover, others feel the potential of remote work is yet another effect that could exacerbate a demise suffered by some older properties.
Whatever the exact causes are, the disparate effects on newer versus older buildings are likely to be apparent beyond April and May, Muscatello said.
“The first five months of the year is just the beginning,” she said. “We’re only starting to see these trends start to really filter into the data.”
Source: “Make Way For Newer Offices, Experts Say“