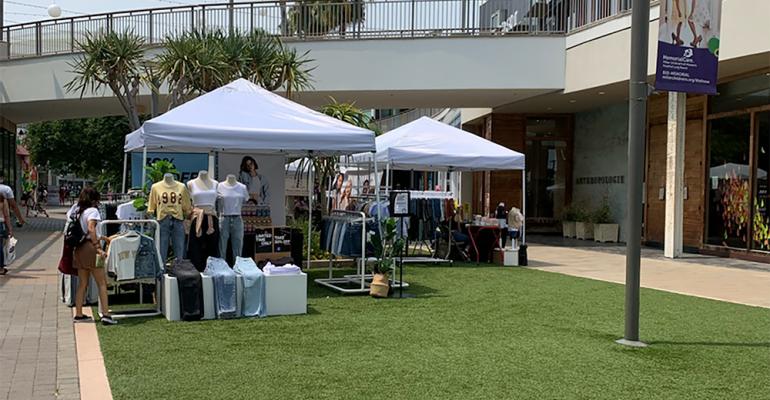 Unibail-Rodamco-Westfield, Simon, Brookfield and the Segerstrom family among mall owners trying this approach in locked-down states.
When COVID-19 forced the closures of indoor malls for a second time in California as coronavirus cases there continued to surge, some mall landlords decided it was time to take action.
(States across the Sun Belt and some Midwest states that lifted restrictions changed course as well, as COVID19 cases spiked and hospitals filled up).

Mall owners launched a concept to essentially turn their malls inside out and bring retailers outside in open-air markets.
For example, Westfield Valley Fair in Santa Clara, Calif.—northern California’s largest mall—opened its Open Air Market in July. The mall is owned by Unibail-Rodamco-Westfield. Mall officials say it’s a safe and innovative way to support their retailers during the COVID-19-related restrictions on businesses. Unibail-Rodamco-Westfield is not alone. Simon Property, Brookfield and the Segerstrom family are among other mall operators to roll out outdoor markets at some of their mall properties.
“Obviously, we had the first closure in March and then reopened in June for almost 30 days,” says Sue Newsom, senior general manager at Westfield Valley Fair. “We closed again July 15. Honestly, not that the first one wasn’t difficult, but the second one I think for me personally was just like that blow. It was like, ‘Okay. Now we’re doing it for a second time.’ And one day, I was literally thinking: what is it we could do to help these poor retailers, and just create some kind of energy and excitement around the property, not only for the retailers, but for our community?”

That brainstorming lead to the market concept on the plaza in front of the mall’s Bloomingdale’s store.
The market features red and white pop-up tents where retailers can display their merchandise and shoppers can also grab food from one of the local food truck vendors. The market runs Fridays to Sundays and is available to any retailer ready to open an outdoor store. Some retailers have requested to stay open outdoors all week.
The concept was launched with seven retailers and has since grown to nearly 40 and continues to grow. Participating chains include Athleta, Shoe Palace, Talbots, UNTUCKit, Kay Jewelers, Hugo Boss, David Yurman and Pottery Barn.
“Just the elevation of the visual presentation and the size of the footprint has really magnified,” Newsom notes.
Newsom says mall management will continue to expand the market as more retailers participate. It will remain open as long as feedback from the retailers and shoppers is positive and interior malls remain closed.

What have they learned?

As the concept builds, you have to “re-merchandise,” Newsom says. “We provide all of the tents, so every Thursday before the event begins, we remap out the whole open air market area so we’re positioning retailers that make sense together. That changes every single week because of the amount of people who decide to join.”
Retailers are honest with management informing them weekly of what went really well and where they can make adjustments, she notes.
“Because of that feedback, we have been able to improve it every single weekend,” Newsom adds.
Additionally, Westfield Valley Fair’s newest program is The Cabanas at Westfield Valley Fair, an outdoor luxury shopping experience open daily by appointment only. Luxury brands including Cartier, Bottega Veneta, Saint Laurent, Tiffany & Co. and Versace offer viewings by appointment in private cabanas on the mall’s outdoor terrace.

Making up for lost sales

These outdoor concepts are giving retailers inside the closed mall the opportunity to make sales and maintain their brand awareness among shoppers, says Newsom.
At many enclosed malls around the U.S., only retailers with exterior entrances have been allowed to stay open. That often includes the big anchor stores.
In an effort to serve consumers, many retailers around the country are offering curbside pick-up. However, that can prove challenging for interior mall stores. Many enclosed malls were already grappling pre-COVID-19 with slow foot traffic due to increasing online shopping and dying anchor department stores, and the pandemic has accelerated that pain.
Retail consultant Jan Kniffen predicted in June that due to the spread of COVID-19, one-third of U.S. malls could shutter or be reconfigured by 2021. Kniffen is founder of J. Rogers Kniffen Worldwide Enterprises.

Other Unibail-Rodamco-Westfield malls in California also launched open air markets, although on a smaller scale, including Westfield Oakridge in San Jose, Calif.
Julian Esposito, general manager of Westfield Oakridge, says the concept was about, “Let’s get some tenants. Let’s get some infrastructure. Let’s think outside the box and be creative and get a little grassroots and see how we can serve the community and our retailers.”
Oakridge’s outdoor market grew from eight retailers and a couple of food trucks to about 15. “It’s definitely exciting and retailers are definitely getting on board and doing what they can to navigate this kind of new normal,” Esposito notes.
Many seem to be successful in the new format.
“Some retailers have really done fantastic outside,” Esposito says. “Some have even beat last year’s numbers, and it’s because I think they’re in a new venue, a new setting. They’re more approachable. They’re getting some guests shopping that they might not have before, because that’s what’s out there and available.”

Del Amo Fashion Center in Los Angeles, owned by Simon Property Group, opened its Outdoor Market on July 31 near its anchor Forever 21, with participating retailers including Tesla, Kate Spade New York, TravisMathew and Nature Republic.
South Coast Plaza in Costa Mesa, Calif., privately held by the Segerstrom family, launched The Pavilion at South Coast Plaza, consisting of open-air suites on the second level of one the mall’s parking structures. Costumers can shop by appointment only at participating boutiques like Cartier, Chanel, Dior, Givenchy, Coach and Alexander McQueen.
Additionally, Glendale Galleria in downtown Glendale, Calif., owned by Brookfield Properties Group, set up outdoor dining in a parking garage as dining inside restaurants remains banned due to COVID-19.  Other malls around the country are also helping their restaurants expand their outdoor dining capacity.

This concept can work not only for malls that are closed, but for malls that have reopened and are trying to draw back shoppers who are wary about returning to bricks-and-mortar retail due to COVID-19.
“With many consumers worried about returning to enclosed retail malls, extending the retail offer outdoors is a logical way of keeping business going and giving tenants an alternative option to serve customers,” says Neil Saunders, managing director at research firm GlobalData Retail.
The experience offered by such pop-up locations is also novel and interesting for consumers, he notes. “The issue is that, despite helping to mitigate the decline in foot traffic, the outdoor destinations are not a complete substitute for their indoor equivalents,” Saunders notes.
They don’t bring in as much money and they don’t offer the full mall experience. “As such, they are little more than a short-term band-aid applied to a much deeper problem that needs to be resolved.”
The outdoor experiences also work well in the summer months, but as the weather turns colder and more wintery across many parts of the country, some of the appeal will wear off, Saunders adds.
Gabriella Santaniello, president and founder of retail consulting firm A Line Partners, has personally watched these malls “taking it outside,” as she’s based in Los Angeles. “Malls are doing tents and bringing some of their merchandise outside, and if people want to buy, an associate will run in and get the inventory,” she notes.
It’s a creative strategy during these unprecedented times, Santaniello says.
“The fact of the matter is they’ve got to get the sales,” she says. “It’s really having a touch point with the customer if you’re enclosed in a mall. If you’re a Nordstrom or Macy’s or another anchor store and you have a door to the outside, you can get traffic.”
A couple of challenges to the concept is that shoppers can’t try on apparel at these pop-ups (although, she notes, they can’t do that at many inside stores during the pandemic), and the pop-ups don’t carry the full assortment of merchandise.
“They’ve got to bring out their best sellers, so it’s sort of anticipating what the customer is going to want,” Santaniello adds.
Source: “Mall Landlords Use Open-Air Pop-Ups to Help Retailers Through the Pandemic and It Seems to be Working”