Outlet Centers Continue to Post Healthy Fundamentals, But There May Be Challenges Ahead

Outlet center operators are reporting strong NOI growth. But rising tenant bankruptcies are likely to have an impact. 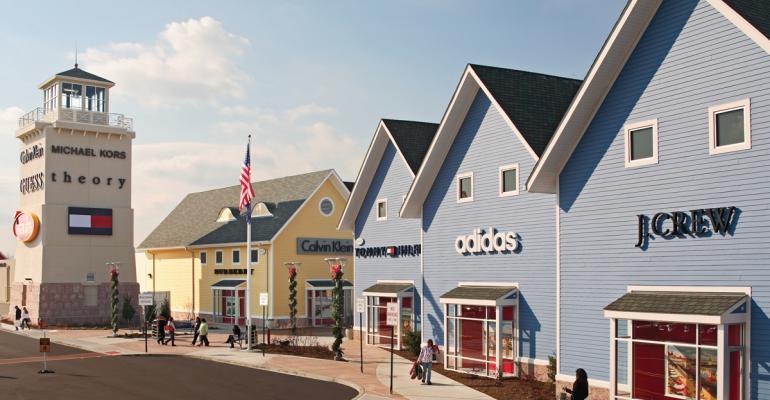 Bricks-and-mortar retail, in general, has been badly bruised over the past several years. The outlet center sector has weathered the storm better than some other retail types as it draws shoppers looking for bargains, but it too faces challenges.
Growing e-commerce competition and off-price players’ increasing strength are impacting the sector. Still, “the outlet industry is a fairly healthy sector,” notes Steve Ferris, vice chairman of national retail tenant services at commercial real estate services firm JLL. While REIT landlords focus a lot of time and energy on maintaining their best-performing regional malls, outlet centers continue to be strong performers within REITs’ overall portfolios.

Outlet stores account for a significant source of profit for many retailers, and are an essential part of many retailers’ business today, according to Ferris.

“The outlet business had a very good year,” said David Simon, chairman and CEO of Simon Property Group, in the REIT’s last earnings call.
Simon, the nation’s biggest mall landlord, is also the dominant player in the outlet industry, with more than 100 outlets across the U.S. and internationally. Tanger Factory Outlets is the only pure-play outlet REIT with 39 centers.

The year was “affected by certain bankruptcies, but we had significant comp NOI growth [in outlets]. It was higher than the mall business,” Simon noted. “We have no worries or concerns at all about our outlet business.”
One reason outlets remain relatively healthy is they don’t have a lot of competition in their sector, Ferris notes. Typically, outlet centers are in a market where there are only one or two of them, so they are fairly well-insulated, Ferris says.
“As long as the brands provide good value, good product to the consumer, they should maintain their stronghold, and the Simons and the Tangers monitor how they merchandise and price to keep that integrity,” Ferris adds.
The outlet sector remains vibrant in comparison to other forms of bricks-and-mortar retail, says Lisa Wagner, a principal with Outlet Resource Group (TORG), a Chicago-based outlet center consulting company.
“We have seen some closing of chains and stores, but most have been a result of factors other than strictly sales, such as debt load and operating costs,” she notes. “There are certainly some outlet centers performing better than others, but in centers where the fundamentals are strong—they are well-located proximate to population centers or on very busy highways or at tourist destinations, plus good design and a strong tenant mix and well-marketed—they are continuing to perform well.”
If any of those fundamentals is not in place, she notes, the centers could be vulnerable to competitive intrusion. But Wagner says the competition isn’t just other retail centers or online sellers. It could be customer dollars being diverted to other forms of spending, like dining and entertainment.
There was an acceleration of outlet development in the early 2000s, but it never got to the point where the country was statured with outlet projects, Ferris says. In the last five years, there have been one to two projects developed a year.
For example, Simon is developing Tulsa Premium Outlets that’s slated to open in 2021, as well as several international projects. Tanger announced plans for a new outlet in Nashville, Tenn.
There are only about 220 outlet centers in the U.S. vs. roughly 1,000 malls, according to research firm Green Street Advisors. That represents only roughly 1 percent of all U.S. retail properties.
Meanwhile, the outlet centers that are getting developed continue to be developed closer to major population centers and more are being built as part of mixed-use developments.
“As we evolve to more hybrid centers, we have the opportunity to finetune tenant mixes and keep the offering fresh and exciting,” Wagner notes. “That nimbleness will keep us in the game of bricks-and- mortar for the future.”

U.S. outlets reported an occupancy rate of 95.7 percent in the third quarter of 2019, according to Green Street.
Tanger reported 97 percent occupancy in the fourth quarter of 2019, while Simon reported 95.1 percent occupancy at year-end across its malls and outlet centers.
Meanwhile, the U.S. regional mall vacancy rate hit a 20-year high of 9.7 percent in the fourth quarter, Reis Moody’s Analytics reported. Mall landlords anticipate more retailers will close, including Pier One Imports, which is the latest to file for bankruptcy.
Outlet centers are also at less risk from large tenants’ closures and bankruptcies since they don’t have anchor tenants. They don’t have to deal with struggling department stores like J.C. Penney, Sears and Macy’s shuttering locations and leaving behind huge chunks of space.
“The tendency toward smaller store units certainly helps make it less risky,” Wagner says.

What about the impact of e-commerce?

Some industry experts says outlet shopping is not easily duplicated online, since it’s about the treasure hunt experience. “Outlet shopping is still a commodity for shoppers,” Ferris says.
However, that’s not to say that outlet landlords aren’t fully aware of Amazon and other big online players’ impact.
In fact, Simon launched an outlet e-commerce site. The REIT is beta testing a website featuring brands and retailers from its Premium Outlet Centers. Dubbed ShopPremiumOutlets.com, it provides outlet retailers and developers another means to generate sales. The beta test includes 2,000 brands and some 300,000 products. Orders are fulfilled directly by retailers and brands, while Simon collects a commission on sales through the website.

Another reason for outlets’ success is cheaper rents and fewer common area maintenance (CAM) costs than enclosed malls, which means outlet centers can be more profitable for retailers.
“Fortunately, outlet rents are much more affordable than some of the street rents and mall rents, so the tenants profitably is a much easier formula, even if there’s a push on margins,” Ferris notes. “And of course, the retailers that are made for the outlets don’t suffer much on the margin play and get more reasonable occupancy costs.”
The country’s top 10 or 15 outlet centers command some pretty high rents, but the sales volumes are there to support it, Ferris adds.
He also notes that the build-out costs for outlet stores are less than for stores at regional malls.

That’s not to say there aren’t challenges

Outlet centers have many of the same struggling tenants found in malls, like Payless, Ascena Group, Chico’s and Gymboree. As a result, retailer bankruptcies are having a significant impact on outlet fundamentals, according to Green Street. Occupancy and market rents will be pressured over the near term.
For example, same-center tenant sales across the Tanger portfolio increased by 1.5 percent for the year ending Dec. 31, 2019. At the same time, Tanger centers posted a 0.4 percent drop in same-center net operating income (NOI), primarily due to the “impact of tenant bankruptcies, lease modifications and store closures,” the company said.
Another challenge is that outlets rely heavily on the troubled apparel sector, Green Street researchers note, with 66 percent of their tenant mix devoted to apparel. (Only 5 percent are entertainment tenants).
Green Street doesn’t expect that tenancy to change much, which makes it tougher to diversify with restaurants and entertainment like many class-A regional malls are doing. Additionally, light consumer traffic at outlets during weekdays, due to the distance from city centers, “prohibits a significant shift in the merchandise mix” of many outlets, Green Street researchers write.
It should be noted that some outlets are finding ways to expand their food and entertainment options.
“It’s absolutely a trend in many centers, but it will not work everywhere,” Wagner says. “The centers that are located in close proximity to population centers or tourist destinations have an advantage in that they can more readily diversify their tenant mix to include experiential concepts like entertainment and dining.”
For outlets located further out, it’s a more difficult strategy.
Another indication of a possible slowdown is the increasing competition from off-price players like TJ Maxx, Burlington and Saks Off Fifth, which are reporting rising sales.
However, the two sectors can co-exist, according to Ferris.
“Off-price retailers are obviously the darlings right now, but I think generally good product at a good price is a good formula in today’s shopping environment,” Ferris says. “The outlets continue to do well and that’s why TJX Cos. has continued to thrive, because of great brands at great prices, which is really what the outlets are.”
By: Liz Wolf (NREI)
Click here to view source article