Tenants’ collapsing one after the other without replacement has a pernicious impact on property prices.

Before the coronavirus, some segments of commercial real estate (CRE) were red hot, others were hanging in there or declining, and one sector, malls, has been in deep trouble since 2016, with prices plunging. Then came the lockdowns. Property prices in every CRE segment fell in April, even those that were red hot. And prices of mall properties got crushed.
The overall Commercial Property Price Index (CPPI) by Green Street Advisorshad peaked in the period of November 2019 through January 2020. In February and March, it ticked down. In April it plunged 9.4% from March, the second largest percent-drop in the data going back to the 1990s. The largest drop was 10.9% in October 2008, following the Lehman bankruptcy. Since the peak in January, the index has dropped 10.7% and is back where it had first been in May 2015: 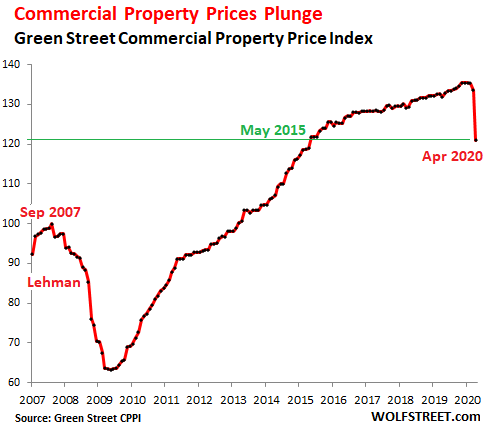 There is sudden chaos in the industry, and the index designed to capture movements in near-real time has trouble capturing the massive month-to-month upheaval.
“The exact numbers are debatable, but property pricing is down about 10%,” said Peter Rothemund, Managing Director at Green Street Advisors, in the report. “Some property types, industrial for example, are probably faring better than that. Retail and lodging values are most likely doing worse.”
“There’s been plenty of examples of blown deals and people walking away from deposits, but the best way for us to get a sense of where things would clear these days is by talking with people in the marketplace — buyers, sellers, brokers,” he said.
During Financial Crisis 1, CRE prices collapsed nearly 40%, according to the Green Street CPPI, including in the middle the 10.9% cliff-dive in October 2008, following the Lehman bankruptcy. From the bottom in May 2009, the index more than doubled to the peak in January 2020. Now it’s back to May 2015 level.

Prices of malls collapse, all CRE sectors get hit

The sub-index of the CPPI for malls collapsed by 20% in April from March, and is down 33% over the past 12 months. The index had peaked in 2016 and has since swooned by 45%. It’s by far the worst-performing sector of the CCPI.
The other segments of the CPPI all dropped in April, but some dropped from record highs such as Manufactured Home Parks (trailer parks) and student housing. Lodging has been weak since 2015:

The chart by Green Street Advisors (below is a 13-year version of the 23-year chart) shows to what extent prices of some property types have shot higher in recent years, particularly Manufactured Home Park (top gray line) while prices of mall properties (dark blue line) have collapsed. Even Industrial (green line, 3rd from the top in April), which includes warehouses and fulfillment centers that were red-hot due to the surge in ecommerce, has dropped in April. No category was spared: 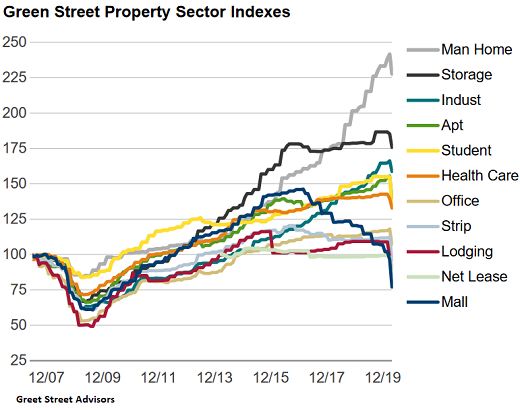 The price collapse of mall properties will continue because tenants are collapsing.

Retail properties have been in a terrible mess for years, as their brick-and-mortar tenants succumbed one after the other to ecommerce. This has already wiped out categories such as CD and video stores, and it is wiping out the icons of American shopping: department stores and clothing stores, with some of the biggest chains having already gotten dismembered in bankruptcy court, including Sears Holdings. And even the survivors have shed tens of thousands of stores over the past three years, as “zombie malls” became a meme on the YouTube.
Now come the lockdowns, and the whole process that would have taken a few more years to play out is condensed into weeks and months. This is reflected in the 45% collapse of prices at mall properties since 2016, amplified by the 20% plunge in April.
The list of retailers now on the verge of filing for bankruptcy or having already filed since the lockdowns is getting longer by the day, as is the list of retailers that have announced permanent store closings since the lockdowns began.
This morning, Stage Stores [SSI], with over 700 stores, announced that it filed for Chapter 11 bankruptcy and plans to liquidate unless it can find a buyer.
Neiman Marcus, a luxury department store that last year still had 45 Neiman Marcus and Bergdorf Goodman stores and 24 Last Call stores, filed for bankruptcy last week, latest chapter in a long saga that now involves $5 billion in debt that resulted from a leveraged buyout in 2005 by private equity firms Warburg Pincus and TPG. They sold the retailer in 2013 to Ares Management and the Canada Pension Plan Investment Board (CPPIB) for $6 billion. Ares and CPPIB have been pummeling creditors with the threat of a bankruptcy filing since early 2017 in order to push them into a debt restructuring where they’d get a large haircut. Now they did.
J.C. Penney is preparing to file for bankruptcy as soon as this week and plans to permanently close about a quarter of its 850 or so stores, sources told Reuters last week. The company missed a $17-million debt payment last Thursday; its grace period expires this Tuesday and would trigger a default. It had already missed a $12-million debt payment on April 15; that grace period expires this Friday. J.C. Penney has long been on my list of bankruptcy candidates, causing me to write in July last year, I’m in Awe of How Long Zombies Like J.C. Penney Keep Getting New Money to Burn. But Bankruptcy Beckons .
Lord & Taylor, which has 38 department stores, said last week that it plans to liquidate its inventory once the lockdown allows it to reopen the stores as it will likely file for bankruptcy where it expects that its remaining assets will be liquidated.
J.Crew Group, which was subject to a leveraged buyout in 2011 by PE firms TPG and Leonard Green & Partners, filed for bankruptcy last week and hopes to avoid liquidation, after having come to an agreement with its creditors to reorganize its debts. Creditors will get 82% of the new company. These types of reorganizations lead to many stores being shuttered, and usually end up back in bankruptcy court for liquidation. Brick-and-mortar retailers are devilishly hard to restructure successfully.
Nordstrom, which has a thriving ecommerce business that was already over one-third of its total revenues before the lockdowns, announced last week that it is planning to shutter 16 of its stores.
It has been an intense litany that will continue. Tenants’ collapsing and disappearing one after the other without replacement has a pernicious impact on property prices. The whole CRE sector of mall properties will have to restructure, and much of it will have to be repurposed, and lenders and holders of commercial mortgage-backed securities will have to take their licks – but instead of having many years or even a decade to deal with it, hoping to get out of them before it happens, they’re caught up in it right now.
Source: “US Commercial Real Estate Prices Plunged in April, Mall Prices Collapsed“