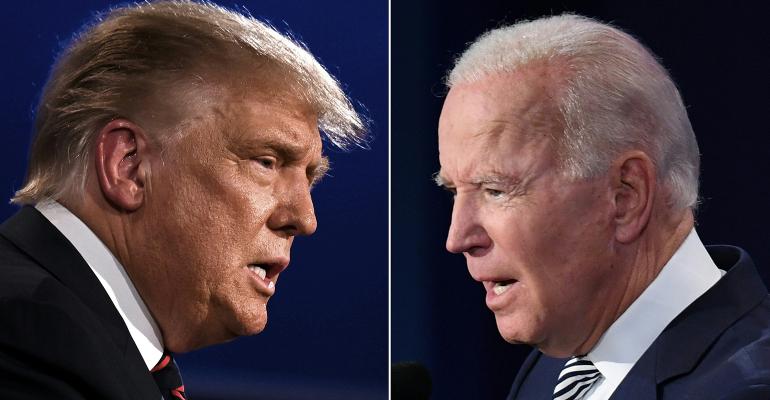 It’s time to start game-planning what might happen after the election results are finally settled.

We are in the homestretch of the 2020 presidential election season. With two polarizing presidential candidates, an ongoing pandemic, recession, social unrest and a mail-in ballot controversy, this cycle is truly like no other.
With the expected increase in mail-in ballots, we may not immediately know the outcome on Nov. 3. The polls, barring an unforeseen “October surprise,” are likely to stay close. And the presidential election may come down to the U.S. Supreme Court, also in flux, significantly impacting market volatility until the outcome is determined.
Given that view, we lay out four possible election outcomes, with our thoughts on how the markets may react.

In this “Blue Wave,” a Biden presidency would most likely retain Jerome Powell as Chair of the Federal Reserve, signaling a continuation of mostly “accommodative” monetary policy.
A Democratic sweep of all levels of government would potentially increase regulations, hampering economic growth. Additionally, higher taxes and a less business-friendly approach could partially offset continued easy monetary policy and the bipartisan spending blowout. This could ultimately burden the market in the coming years.
Potential Market Reaction
Equity Markets:

Potential Positives of a “Blue Wave”
Fiscal gridlock would be lifted, ending roadblocks for additional recovery packages.
Without the spending checks of a Republican Senate, Democrats are emboldened to increase spending to help the U.S. recover from the pandemic.
Potential Market Reaction
Equity Markets:

Political gridlock would remain, with lower growth. A bipartisan spending blowout and an environment where Fed policy is once again a primary driver of economic and market outcomes continues.
Potential Market Reaction
Equity Markets:

With Trump talking about stimulus-via-tax cuts, we could see something like the 2017 market environment, where stocks were juiced higher on that prospect. Additionally, with the GOP throwing fiscal thrift out the window in recent years, deep deficit spending could enable the economy to reach escape velocity in 2021 – at the cost of long-term fiscal health.
Potential Market Reaction
Equity Markets:

A “Red Wave” would continue the bipartisan spending blowout, pressure the Fed to maintain easy monetary policy and begin immediate talks of additional tax cuts. The business-friendly regulatory environment would please domestic energy, as would the higher inflation that we foresee developing in 2021 and 2022 as a consequence of 2020’s monetary expansion. This could force the Fed to reverse its current zero interest rate policy to quell inflation.
Potential Market Reaction
Equity Markets:

There are risks associated with investing, including possible loss of principal.
This material contains the opinions of the authors, which are subject to change, and should not be considered or interpreted as a recommendation to participate in any particular trading strategy, or deemed to be an offer or sale of any investment product, and it should not be relied on as such.
Source: “Weighing the Market’s Reaction to 4 Potential 2020 Election Outcomes“