Multifamily Properties Are Positioned for a Strong 2021 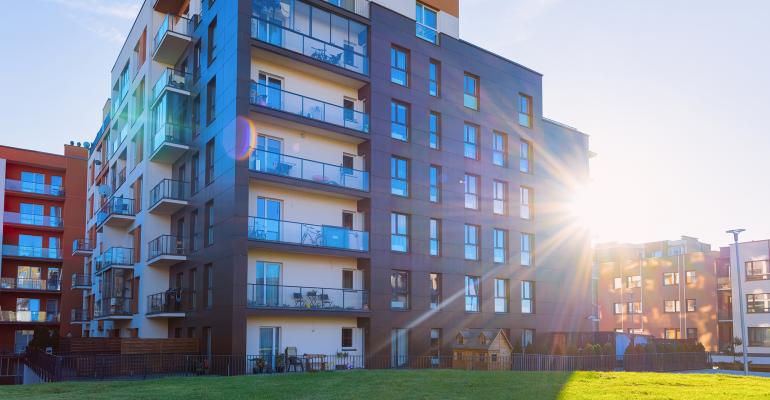 The rollout of a vaccine and the likelihood of more federal COVID-19 relief measures in the near term will help sustain the apartment sector.
The multifamily sector weathered the storm in 2020, living up to its reputation as one of the most stable commercial real estate asset classes. The forecast for apartments in the new year is also bright. And even with where things sit today with the still raging pandemic and the terrifying scene that unfolded in the nation’s capital last week, observers point to the continued rollout of vaccines and the likelihood of new COVID-19 relief measures with the new administration and Democratic control of Congress as reasons for high hopes for the balance of 2021.
Economists expect the average apartment community to remain close to fully-occupied in 2021 with relatively stable rents and stable collections. Investors ended 2020 on a brisk buying clip fueled in part by capital providers remaining more than willing to finance the sector. Hopes that working vaccines against the coronavirus will eventually be distributed have helped offset—so far—the recent jaw-dropping spikes in new infections, hospitalizations and deaths. Hopes that Congress might provide more support to people and business hurt by the pandemic—and emergency assistance passed in December 2020—should make up for the expiration of vital programs in the second half of 2020.
“Multifamily remains a very stable investment with a very stable outlook,” says John Sebree, senior vice president and national director of Marcus & Millichap’s Multi Housing Division, working in the firm’s Chicago office.
The biggest exceptions to this stability are all the new apartments still opening in the downtowns of expensive, “gateway” cities, where rents are likely to fall again in 2021. “You have to talk about that market… a few urban, core markets like San Francisco and New York City… and then you have to talk about everything else,” says Sebree.

Despite a slow rollout, the vaccine is coming

Doctors diagnosed hundreds of thousands of new coronavirus infections every day on average in the first weeks of 2021. The panic caused by the pandemic weakened a recovery in the U.S. economy—and also weakened the demand for apartments.
“Job losses in the December figures do not bode well,” says Andrew Rybczynski, managing consultant at CoStar Group, based in Boston. “Employment correlates well with apartment demand, and so while the jobs figures remain weak, it is reasonable to remain wary… Progress slowed over the past few months.”
However the demand for apartments has already survived a lot since the coronavirus struck in early 2020. Apartment managers continued to lease apartments even in the first months of the pandemic. Markets in the U.S. absorbed 71,493 apartments in second quarter, according to CoStar. That’s surprisingly strong considering most of the U.S. economy was shut down to slow the spread of the virus, though it is also the weakest absorption in years for a second quarter—usually the busiest time of year for the apartment business.
Demand for apartments strengthened through the rest of the year. Markets absorbed a net 114,000 apartments in the third quarter, one of the strongest third quarters CoStar has ever recorded in multifamily. And the fourth quarter was the strongest since 2015, based on preliminary data, says Rybczynski.
So far, relatively strong demand helped managers keep most buildings fully-occupied, despite the pandemic and competition from a flood of new apartments. The percentage of occupied apartments inched slowly downwards to 93.16 percent in the fourth quarter of 2020 from a peak of 93.84 percent in the second quarter of 2019, according to CoStar.
That’s a decline so slight, it is almost difficult to see in the data. If you round to the nearest whole percent point, the occupancy rate doesn’t change from 93 percent throughout 2020, according to CoStar.
In the last months of 2020, health officials approved two vaccines against the coronavirus. “The vaccines undoubtedly make tenants, landlords and nearly everyone more hopeful,” says Rybczynski. “There is certainly a light at the end of the tunnel… though the [slow] rollout does not suggest that the end of the pandemic is right around the corner.”
“Our economic forecasts already assumed sluggish job production in the first half of 2021 and then more robust expansion in the last half of the year,” says Greg Willett, chief economist for RealPage, Inc., headquartered in Richardson, Texas. “The introduction of vaccines has made us more confident in that outlook.”

More stimulus dollars not a moment too soon

Housing advocates warned millions of renters could be evicted if federal programs like enhanced unemployment benefits expired at the end of August 2020. Many who lost jobs in the pandemic were still out of work, and millions had already fallen behind in their rent, especially at smaller, less-expensive apartment properties. Well, Congress let the most of the supports created by the Coronavirus Aid, Relief, and Economic Security (CARES) Act expire, and did not renew or replace them until December 2020.
A federal moratorium on evictions has protected the vast majority of unemployed tenants from formal eviction—but many seem to have moved out anyway, according to CoStar. Rents in less-expensive, began to fall in class-C apartment buildings as the year ended—though these rents had been stable for much 2020.
“The end of the CARES Act coincides too closely with the start of weakness in one-star and two-star [Class-C] rents to be ignored,” says Rybczynski. “It is possible that additional stimulus will buoy those households renting at the lower end of the market.”
Competition from new apartments hammers overbuilt downtowns
Developers still plan to open thousands of new, luxury apartments begun before the pandemic in some of the most overbuilt and most expensive downtown submarkets in the U.S.
“The areas scheduled to get some of the biggest increases in deliveries are the gateway metros where performances already are struggling,” says Greg Willett.
Developers are expected to open 403,644 new apartments in 2021, with much of that concentrated in downtowns already crowded with new apartments, according to RealPage. Even if thousands of those units are delayed, 2021 will be the biggest year for multifamily construction in decades. It will be up 17 percent from 2020, when developers finished 344,380 new apartments despite the pandemic—which seemed like a huge number at the time. In comparison, developers finished less than 200,000 new apartments a year in most years since 2000, according to RealPage.
“The run-ups in completions are especially pronounced in New York/New Jersey, Los Angeles, the Bay Area and Seattle,” says Willett. “Even though we think demand in those locations improves in 2021, it appears likely that rent cuts continue due to the negative influence of all the new supply.”
Source: “Multifamily Properties Are Positioned for a Strong 2021“