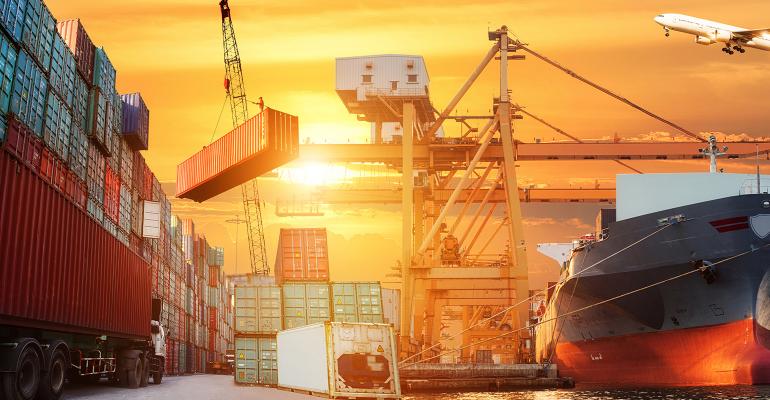 USMCA-related factors to influence industrial real estate growth.
Sponsored by Frank P. Crivello
Industrial real estate has been at the front of the commercial real estate pack ever since the COVID-19 pandemic caused an e-commerce boom and subsequent demand spike for warehousing, distribution, and cold storage space. While the coronavirus continued to dominate the headlines, however, the United States-Mexico-Canada Agreement (USMCA) quietly went into effect on July 1, 2020.

Under the terms of the new agreement, 75 percent of the components in any vehicle sold in North America must have been made in North America—up from 62.5 percent under NAFTA. Failure to comply with this rule will result in a 25 percent tariff on the vehicle. With many manufacturers already seeking to reshore and nearshore operations, it’s likely that automakers will seek to lease or build manufacturing or logistics facilities on either side of the U.S.-Mexico border, where the bulk of automotive parts are traded.

This trend will also extend into down-tier suppliers, who must now be able to certify that the components they produce for automotive OEMs were made in one of the three USMCA countries. Essentially, any vendor that does substantial business with the automotive sector will need to consider locating facilities in the United States, Mexico, or Canada to remain compliant with more stringent traceability regulations.

The USMCA provides significant opportunities for agricultural imports and exports among the three partner nations. As of 2017, Canada and Mexico already accounted for 27 percent of U.S. food exports, and the new agreement will likely increase that number. It will now be easier for U.S. stakeholders to export dairy, eggs, and poultry, while restrictions on imports of Canadian peanuts, processed peanut products, and dairy products have also been eased.
A substantial increase in online grocery purchases already has the cold chain stretched to capacity in many areas of the United States, which will present challenges for importers and exporters seeking additional cold chain assets along the borders to facilitate safe trade of food products.

While e-commerce doesn’t really need the additional boost at the moment, the USMCA has made it easier for online sellers to reach consumers across North American borders thanks to de minimis increases. All three countries have raised their de minimis limits—the minimum value of a cross-border shipment before it is subject to duties—making it much more cost-effective for consumers to make small purchases from online sellers in USMCA partner nations.
As cross-border e-commerce sales increase in popularity, this should drive some demand for warehousing and distribution space along North American borders. Given that most primary markets in the United States are not in border locations, it stands to reason that this demand shouldn’t conflict with more general demand for distribution space near population centers.
Source: “The USMCA & the Industrial Real Estate Sector”